Attacks on nightclubs, sports arenas, parks and streets, in editorial offices, youth camps, refugee housing, the metro and on board aeroplanes. Are the decision-makers able to keep up with these threat scenarios?

The threat from various extreme movements, paramilitary forces and pure terrorist organisations, which so far might have seemed rather diffuse to us in Finland, is coming closer to home. Can the Finnish decision-makers keep up with the rapid changes and new threat scenarios that challenge the security of civil society?
“Unfortunately, they can’t.”

This is the answer given by Doctor Lars Nicander who is the Director of the Centre for Asymmetric Threat Studies (CATS) at the Swedish Defence University in Stockholm. He received his doctorate in political science in late 2015 at Åbo Akademi University in Vaasa, Finland, with his thesis New Threats – Old Routines. Bureaucratic adaptability in the security policy environment.

CATS focuses on studying asymmetric threats in the age of information. The centre’s main areas consist of terrorism studies, intelligence studies and information operations such as cyber security, cyber defence and influence operations.

For his thesis at Åbo Akademi University Nicander particularly explored the fundamental question of how quickly authorities, for example government offices, respond and make new concrete decisions based on various reports and other signals from their intelligence and security services.

“The cold war up to the 1990s created a very stable world. There was no great need for rapid responses, but there was time for slow and bureaucratic decision-making on investing in, for example, new weapon systems such as aircraft, tanks or warships. But in the 1990s it was soon realised that the new and increasing use of various IT systems made the new information society entirely vulnerable and easy to influence, beyond and despite all existing military security measures. We acquired what is called a ‘critical infrastructure’,” Nicander explains.

The new and often unpredictable security threats spread their tentacles further and also into civil society. There were suddenly a large number of new values in society to be protected against an increasing interest among various groups, movements and organisations in manipulating, threatening and attacking these values. At the same time several countries, such as Sweden, had to a large degree adjusted to a new form of state government, which is usually called ‘New Public Management’ where just-in-time delivery and narrow security margins were the norm.

“And in the 2000s, after ‘9/11’ in 2001, direct threats and attacks from various terrorist groups increased in number. We haven’t yet seen more extensive, competent attempts from such terrorists to also attack the USA or European countries through cyber space. They probably do not so far have the resources or the know-how that such attacks require.”

There are not many pre-existing theories, or much empirical material on the issues explored in Lars Nicander’s doctoral thesis, which include how closed monopolies in the state apparatus, such as intelligence services and various independent authorities, collaborate in order to respond to new threats.

On the other hand, there have been rapid changes in the way in which, among other organisations, the Islamic state, or IS, acts and operates. Only recently it was commonly believed that IS would not follow al-Qaeda’s example and attack civil targets outside of its own area and region. According to Nicander, the only solution for countering this new threat is better and more adjustable intelligence services with sufficient powers.

“In this respect, the former NSA employee Edward Snowden has contributed to creating a situation where many intelligence services are more or less blind, at least for the time being. But on the other hand, many countries also have themselves to blame. As all questions and problems pertaining to security and external threats to the security of the citizens, for example in Sweden and Finland, have been treated in a tightly closed system without qualified and competent, independent second-opinion functions, there is a lack of what in Britain, for example, are called ‘critical friends’. Therefore the readiness to change and the will to cooperate are weak and in that case relatively self-sufficient authorities become stronger, as is the case in Sweden.”

A far-too-strict secrecy thus leads to a kind of incrementalism: authorities continually add new talents to the battle against, for instance, terrorism, but at the same time nobody is prepared to reduce or even adjust the existing talents and tools. This results in there being even less money than before left for concrete and rapid measures.

“There is no coordination of resources that could be used much more efficiently than presently in order to respond to, among other things, the new security threats,” says Nicander.

His suggestion for increasing pluralism and adaptability in security policies is therefore to facilitate the creation of more so-called independent think tanks in the form of ‘universities without teaching’. These think tanks could be partly modelled on the international Chatham House, but in these new bodies security classified persons from various open positions and spheres of interest in society could evaluate and analyse the security situation and recommend new government measures.

“This would perhaps challenge and present a competitive edge to the old and somewhat self-conceited knowledge monopoly in this area. As it is, there are simply too many muddled bottlenecks which obstruct the process.”

Such bottlenecks can be cleared by increasing government offices’ willingness to quickly adopt reports from intelligence services and other signals of new security threats. And to more swiftly include counter measures in budget negotiations and then implement these in a competent manner.

Naturally, Nicander respects the slow but democratic decision-making process where the rule of law is the guiding principle, but he would like there to be a governmental unit that in a professional way could provide comprehensive risk evaluations and focus on long-term planning of defence measures and general security. These are missing today.

“Above all, our government offices need better procurement skills. They must know how to steer and focus the executive social activities in order to create incentives to overcome the inability to change which is innate to bureaucracy.”

Nobody is born a Jihadist

Nobody is born a Jihadist

”Introducing new strict laws against increasing terrorism is not enough. Deeper and more extensive preventive work, including numerous local measures in countries such as Sweden and Finland is more important than ever in this situation,” says Doctor Magnus Ranstorp, one of Europe’s leading experts on terrorism and militant Islamic groups such as IS, al-Qaeda, Hamas and Hezbollah. He is Research Director at the Department of Security, Strategy and Leadership at the Swedish Defence University, Head of Terrorism Studies at the university’s Centre for Asymmetric Threat Studies.

According to Ranstorp, we in the West have relativised the significance of religion and ideology in the increasing occurrence of terrorist acts.
“In our secularised and individualised countries we find it difficult to understand that the rest of the world is much more collectivised and religious than we are. In Sweden our politicians have failed to admit this, and have therefore also to a large degree failed in the Swedish integration policy.”

Totally stopping the flow of asylum seekers to Sweden and Finland because a small number of Jihadists might enter among them, is, according to Ranstorp, not a good solution. Instead, it should be possible to identify these people more easily and more quickly than before, by better cooperation between the authorities in the EU concerning, for example, passport information and other ID biometrics.

And all refugees and new asylum seekers cannot be lumped together. There are sectarian tensions also between various refugee groups: different Islamic viewpoints and groupings, the attitude of Christian refugees to Islam and vice versa.

“This is a veritable mosaic of totally different individuals with ongoing dynamics between the groups they are part of. And it is a fact that some extreme groups seem to be increasingly inclined to violence. But the colours and patterns in the kaleidoscope are constantly changing. The prime colours can be made up of socio-psychological factors, such as country of origin, adventure-seeking, religious and ideological pondering and various family ties, but also of purely social and political factors.”

“Nobody is born an extremist. Together we can counteract violent extremism through preventive work aiming at strengthening individuals and society. We have not yet seen any larger scale, well-planned attempts at systemically smuggling in Sunni Salafist fighters in Sweden. But when the passports of such fighters are confiscated in countries such as Belgium and France, they instead try to enter Europe on falsified Syrian passports.”

It is difficult to identify any clear and simple profile for those who tend to be recruited to IS. The engine of radicalisation has many cylin­ders and they may consist of strong group dynamics, a few good friends, a person’s own family and, increasingly today, of social media, where various symbolic values provide life with meaning.
More preventive measures at the local level with various knowledge centres and citizens’ forums, counselling and support for traumatised persons and their families, and a more effective follow-up of correctional treatments are needed as a complement to stricter legislation and longer punishments.

“I’m deeply concerned because of the increasingly marginalised position that immigrants and refugees are forced to live in in Sweden. The infrastructure in immigrant-dense areas contributes to the growth of social gaps and soon society will no longer be able to endure the severe social pressures which will consequently emerge.” 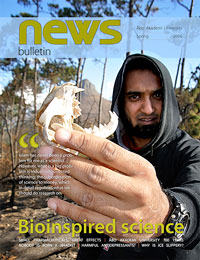